Cities and towns across the nation are undergoing revitalization programs at an ever-increasing pace as citizens’ demand better recreation facilities, more choices in housing and entertainment and maximum benefits of economic development. But what do city planners do when their “ugly old water tower” stands right smack dab in the middle of the area to be redeveloped? Their water system needs the tank, but their constituents don’t like the looks of it … so they make it the landmark at the center of their plans.

The City of Carmel, Indiana is at the forefront of local revitalization. The population that was a whopping 31,808 in 1996, swelled to over 91,000 by 2016, and is expected to reach 110,000 by the year 2020. Named by niche.com as the #1 Best Place to Live in America in 2017, the City that has already seen the extraordinarily successful development of the Clay Terrace, City Center, and the City Arts and Design District has turned its attention to redeveloping a once-industrial area, now known as Midtown. But as you may have guessed, right in the middle of the industrial complex, soon to be replaced by state-of-the-art, mixed-use facilities, was the City’s 500,000 gallon, six-column, elevated water tower in need of repair and repainting.

Carmel City leaders engaged the graphic design artists who had helped them successfully design and implement the City’s very popular Arts and Design District. While a shiny, newly painted water tower would have looked nice, planners were seeking a more industrial, grittier look to compliment a planned theme of development around the tank. This new theme would represent the area’s industrial history as a stop along the old Monon Railway. Thus evolved the City’s newly restored, welded-steel, elevated South Tank, complete with a custom paint scheme carefully chosen to recreate the appearance of an old steel tank, complete with faux rivets. The tank project was completed just in time for the major area redevelopment that includes a 15,000 square foot craft beer and spirits distiller and tasting room. This brick building, too, has the flavor of days gone by.

Several matters further complicated this project. There were a number of communication antennas on the site, the site itself was very tight and the City’s window of opportunity to repaint was quite narrow.

The antennas on the tank belonged to four different communications companies. The need to have their antennas back in service combined with the upcoming summer season’s high water demand resulted in an accelerated project and the tank’s quick return to service. While the tank site was already restrictive for this repainting project, the buildings planned for future construction would severely constrain the available site even more and would require extensive precautions when the tank was repainted in the future. For this reason, a long-lasting zinc/polyurethane/fluorourethane exterior coating system was chosen.

Once the antennas and associated cables on the tank were relocated to a temporary tower to the west of the tank, the existing antenna mast was removed from the top of the tank to allow for the installation of the containment system. The mast was lowered to the ground using a crane, cleaned and repainted, and a galvanized stationary ladder was added to the 11-foot structure so that it could be re-installed on the tank after the tank cleaning and painting were completed. Two pipes were added on each side of column #3 to route the antenna cables from the antenna mast to grade, protecting the cables and creating a much cleaner, more organized antenna and cable arrangement, plus eliminating the tripping hazards that were previously noted on the balcony.

A Class 2A containment system, as specified in Section 4.2.2.2 of the SSPC-Guide 6, “Guide For Containing Surface Preparation Debris Generated During Paint Removal Operations,” was specified for containment of the abrasive-blast-cleaning dust, emissions and debris, and coating overspray and paint droplets on the tank exterior. The system was required to be capable of being raised or lowered within 15 minutes in case of inclement weather to prevent unacceptable loads being placed on the tank and tower, and it was equipped with a roof bonnet. The dust-collection system was specified to be a Type J1 air filtration system at minimum.

The consultant’s project specification called for a non-metallic, expendable abrasive to be used to remove the old coatings. The abrasive had to meet the minimum requirements of SSPC-AB 1, “Mineral and Slag Abrasives” and the requirements of Class A for silica content (crystalline silica less than 1 percent by weight before blasting). An initial blast-cleaning of areas suspected of pitting was performed to mark any pits in need of repair welding. Pits that were not structurally significant but contained sharp edges that would be difficult to clean and coat were marked to be filled with an epoxy material.

Coatings selected for this project were a zinc coating used as a holding primer on the tank interior, with high-build, single-coat ultra-high-solids epoxy amine used for the interior finish coating. An ultra-high-solids epoxy was selected as a long-life option that had the additional benefit of returning the tank to service in a shorter period of time. The single-application, multi-pass, high-build coating cures relatively quickly, which expedited the completion of the interior coating application. To extend the pot life of the coating and for optimal performance during application, the epoxy was kept “on ice” during mixing and application.

The interior surfaces of the container were holiday tested in accordance with AWWA D102 (Coating Steel Water-Storage Tanks) and NACE SP0188 (Discontinuity [Holiday] Testing of New Protective Coatings on Conductive Substrates) standards. The consultant’s project specifications modified the AWWA D102 standard to include holiday testing of the interior surfaces below the high water level.

For additional protection on weld seams and sharp edges, the tank exterior was stripe coated with an epoxy. Test panels were painted to ensure that the colors matched the coating scheme and the designers’ choice of color.

The coating system selected for the tank exterior was a three-coat system of zinc primer, an epoxy stripe coat, an intermediate coat of polyurethane and a fluoropolymer-urethane semi-gloss finish coat. A fluoropolymer-urethane gloss coating was used for the two logos on the tank. This coating system was designed to provide a durable, long-lasting coating, excellent color retention and decreased future maintenance.

WATER TANK IN KANSAS AWARDED FOR ITS “OZ-SOME” DESIGN 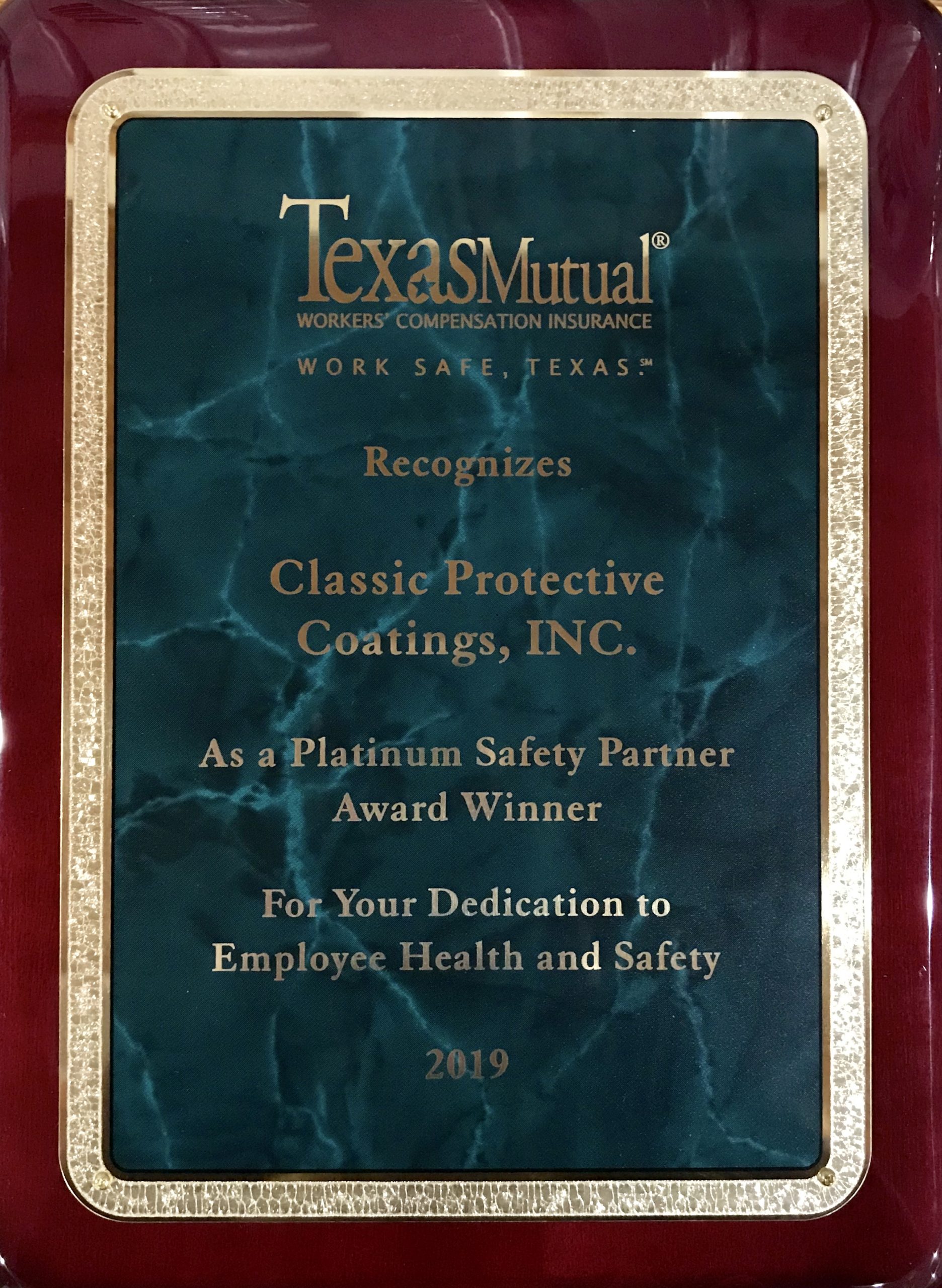 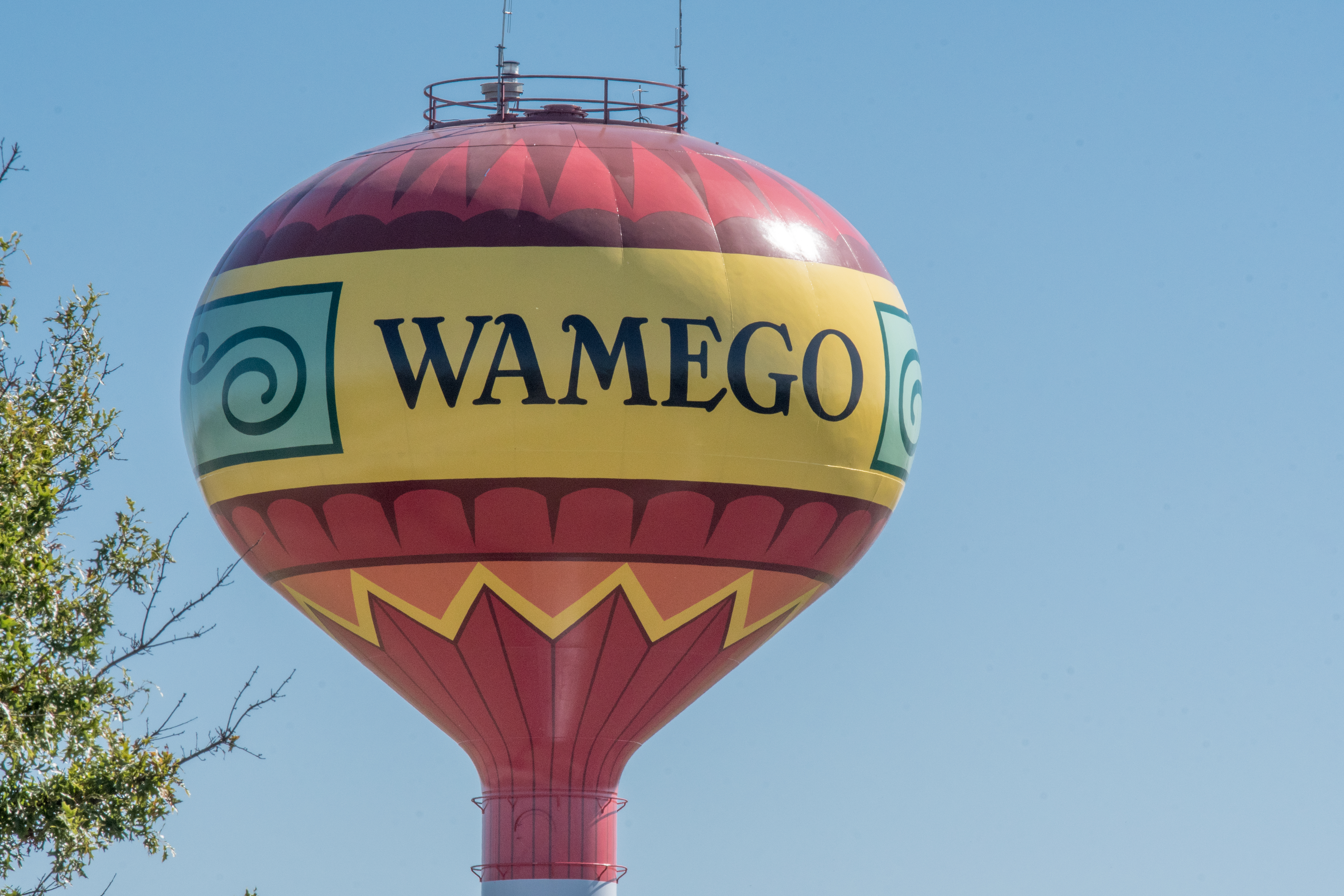 Winner of Tnemec Tank of the Year and Peoples Choice Award